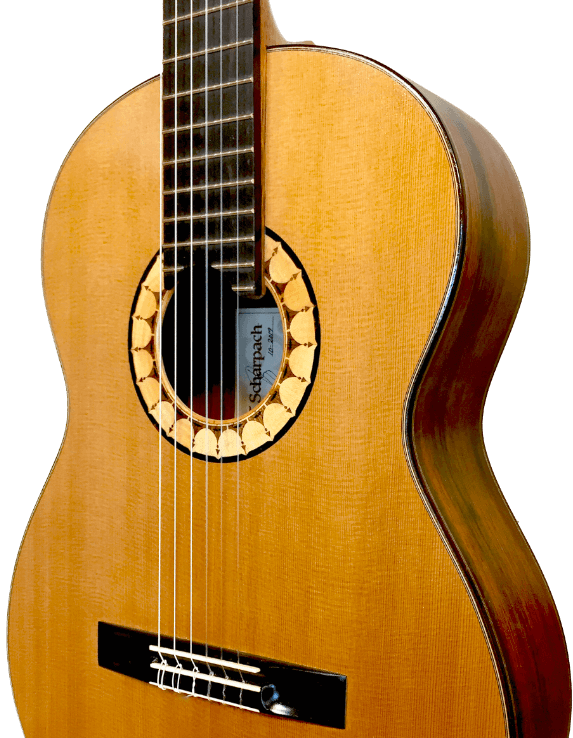 The handmade classical guitars from Scharpach Guitars are made by using the highest quality materials, perfectionistic crafting practices, and pure attention to detail to match your specific needs as a guitar player.

For the tops we use European spruce wood, which is at least 40 years old. For the sides and back on the other hand, we use Brazilian rosewood, which is stocked wood more than 100 years old.

The traditional version of this classic guitar can be built either in the style of Santos Hernandez, Robert Bouchet or Daniel Friederich.

These traditional handmade classical guitars are of great value and impress with their unique sound. We have researched many guitars from these makers. Theo Scharpach’s 40 years of experience in guitar making has made it possible to understand the unique bracing and building targets of these makers. These guitars offer a warmth and sweetness that is much sought after.

Our classical guitar double top version retains the tone of the traditional guitar as much as possible, delivering a great projection and yet a warm sound.

Of course, we accept custom-built nylon string orders as well. For example, a cutaway version for those who like to play Jazz.

OUR SELECTION OF HANDMADE CLASSICAL GUITARS

At Scharpach custom classic guitars, Scharpach has been involved with many projects to build handmade classical guitars. Due to his access to the most exclusive wood, materials and craftsmanship experience, when managed to create custom master guitars completely built to match the client’s needs. Are you interested in buying a classical guitar handmade by Theo Scharpach? Please use our contact form below.

Theo is currently building classical acoustic guitars that are inspired by the great Spanish master Santos Hernandez. These guitars are of great value and impress with their unique sound. For this purpose, Theo Scharpach researched two guitars created by Santos Hernandez dating from 1925 and 1935 respectively. These two guitars, from different periods, were kindly made available to us by their owners. Santos Hernandez made one of the guitars at the Ramirez workshop and has been played by Andreas Segovia. He later started his own workshop. 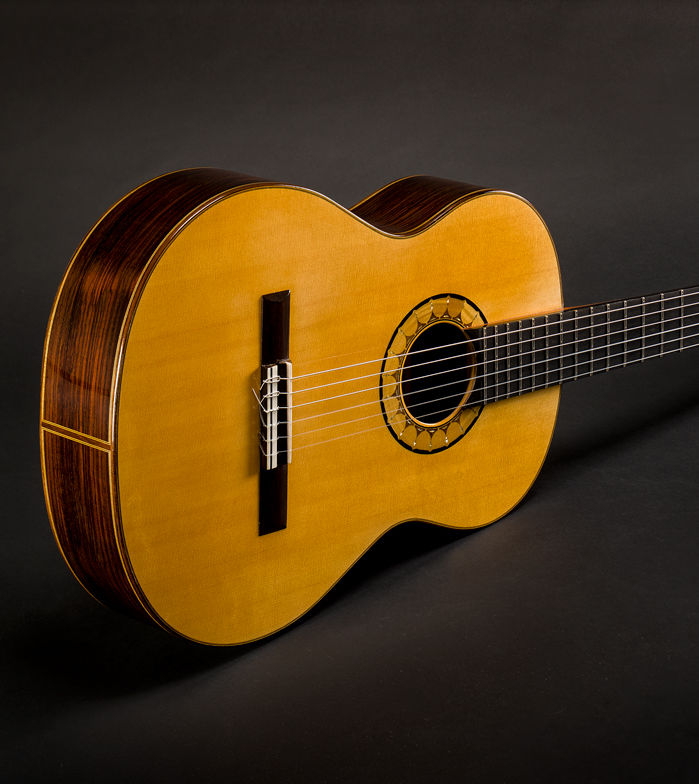 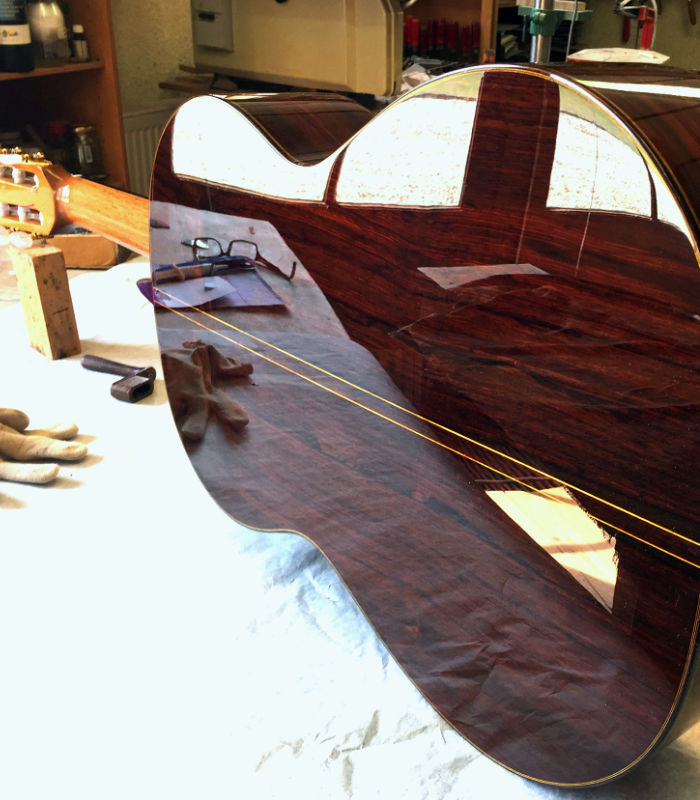 I build an “unconventional” double guitar without the use of Nomex or carbon reinforcement strips, as Theo feels these are artificial materials and do not age during an instrument’s life.

Mostly, cedar top was used on the outside and a spruce top on the inside. We also use no lattice bracing. This may not be conducive to generating high volumes, but it will promote tonal quality with sufficient volume. At Scharpach, Theo aims to build classical guitars handmade which are capable of singing, not guitars that shout.

Preludio Saudade: La Cathedral by A. Barrios.
Played by Rovshan Mamedkuliev.
The video is a Life Registration.

An Idea, by Leo Bouwer. Beautiful performance by Rovshan Mamedkuliev. 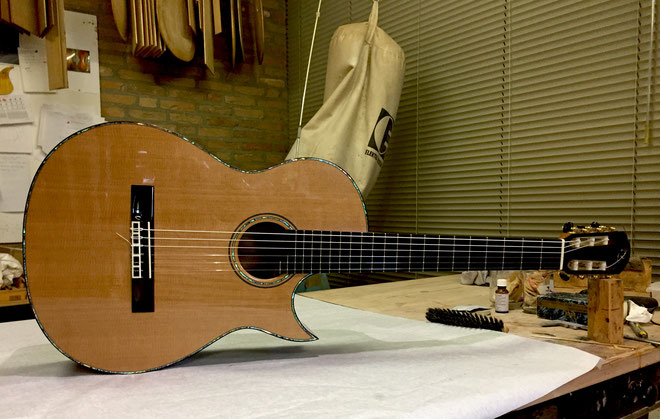 Sometimes a customer requests for a custom version, like this cutaway.
This is always a joy.

The price of handmade classical guitars for masters

The pricing for the classical acoustic guitars starts at 9,645 euros, but this price may vary depending on your exact specifications.

Are you interested in having your handmade classical guitar? Contact Theo Scharpach today for a free consultation!

Scharpach Guitars uses only the most unique and high quality sounding materials to create the best classical guitars.

This example is one extremely special and unique project concerning a guitar that was hand-made with wood from the roof of the Frauenkirche in Munich: the Concertura Dolezza.

Made from 500-year-old well-seasoned spruce tonewood and a 100-year-old Brazilian rosewood.

The woods for the sides and back are made from the finest Brazilian rosewood that can be found. Their age is over 100 years. The guitar creates a sound from a different world and preserves an eternal story. 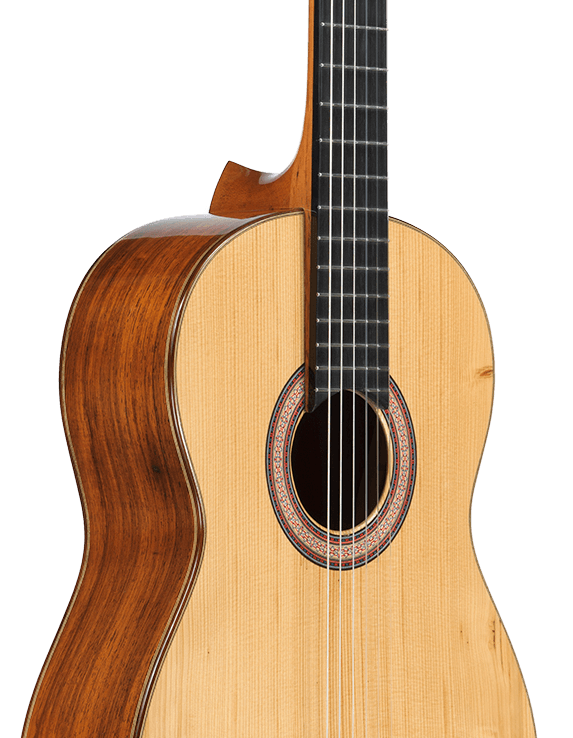 The story of the spruce tonewood from Munich’s damaged Frauenkirche.

The story of this wood is inspiring, sensational and intriguing. The spruce used to build this unique classical guitar was once part of Munich’s cathedral church, the Frauenkirche. The wood is over 500 years old.

The cathedral roof was constructed from sprucewood donated by peasants in the German Alps. Dendrochronology – or annual ring analysis – pinpoints the origin of the trees to about the year 1190. The trees were felled in the Bavarian alps in around 1460 and were floated down the river Isar to Munich, from where they were retrieved and used in the construction of the church roof, completed in 1492.

Towards the end of the Second World War, the cathedral suffered major bomb damage. Some of the damaged roof timbers went missing, as local residents needed wood to cook their meals or heat their homes. Luckily, Franz Fuchs, a violin maker, managed to salvage some of the larger wooden beams from the ruins and went on to make 43 violins, 3 violas and 3 cellos from this beautiful material.

Bavarian peasant farmers felled and donated part of their forest for the construction of Munich’s cathedral between 1468 and 1488. The trees themselves date back to the 12th century and were grown at altitudes of over 1000 metres near the town of Lenggries in a valley south of Munich.

“Imagine that the wood was absorbing the vibration of music that was performed in this sacred place, music from medieval times through renaissance, baroque, classical and modern periods. Incredible to imagine the choirs, the orchestras and chamber ensembles throughout the centuries whose sounds have been gently vibrating and therefore leaving their voices within the wood. And the countless sermons, wedding’s, baptisms and even funerals, taken place in this solemn structure again leaving their sound vibrations imprinted in this wood. This incredible wood with so many stories dwelling in its grain has been given a second chance at life in this instrument and again  words fail to describe how precious an experience it is to play this guitar. This is guitar making taking to entire different level.”